In honor of the occasion, Jim Hallberg, station Program Coordinator and host of Driftless Mornings, opened his program with a memory.

Ten years—and 1 minute—ago, he recalled, a small group of radioactivists had gathered around a mixing board and pushed a button.  A red light came on.  One quiet voice broadcast the station’s first words:  “I think we’re on.”  Community radio had come to Viroqua.

Still today the only non-commercial, volunteer-based, listener-sponsored, community station in southwest Wisconsin, WDRT survives, Hallberg says, “on volunteer energy and strong community financial support.”  Staffing has grown from 30 core volunteers to over 100, drawn from a town of only 4,400.  Many original volunteers, including Hallberg, are still there.  The station produces most of its own programming, music for varied tastes, ages, genders and genres, as well as local news and public affairs.  Page-turner Radio features books by local authors, and, on Citizens Speak Out, listeners air their opinions and critiques.  Local programming is supplemented by independent, syndicated shows.  The station owns their building, an early donation from an anonymous donor, and all of their equipment.

Founding a local station was first proposed in 2003 at a series of community meetings convened to lay out a shared vision for the future of the area.

“I believe I had the original idea for it,” Hallberg recalls. “I had moved to this area from northern California where we were ardent listeners of KPFA…. We were in this very rural area, a beautiful space, but the thing we missed most was radio, and specifically community radio, and even more specifically the range of music and political information and the news we needed to have.”

A small, dedicated group of radio activists got to work immediately, incorporating the essential legal and fundraising entities, only to discover that FCC licenses were not available at the time.  In 2005, tired of waiting, the group set up radiodriftless.org, an internet/streaming station.  Then, finally, in 2009, when a new FCC licensing window opened, the group made application and eventually won.

In these ten years, the station has taken community service as a key mission and has, in turn, won strong local support.

Viroqua is located in Vernon County, economically one of Wisconsin’s poorest counties; but, Hallberg adds, “it’s also got the state’s highest concentration of organic farms.”  Part of a portion of the country that was not flattened by glaciers during the last ice age, known as “the Driftless Area,” the town has drawn together long-time residents and recent arrivals looking for new ways to live.

“People living here…wanted to have an alternative,” Hallberg says.  “They’re seekers of information, of art, of education, of cultures and life styles.  There is an innate sense of living in a community, and…that has been instilled in the young people as well.”

The station’s endurance, Hallberg continues, springs then from “the uniqueness of volunteer radio, where people bring their own music into the studio….A fairly wide range of music culturally and artistically supports a programming schedule whose basic mission is to educate.  We’re an educational FM station; that’s how we’re licensed and we’re very aware of that….It always sounds like the people that are doing the shows at any given time; it sounds like us.” 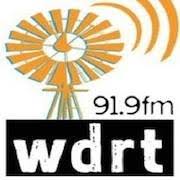 Thanks to creative thinking, the station has, thus far, remained on through the pandemic.

“Three of us ran the station for well over a month,” Hallberg explains, “using old programming, previously recorded live shows, and the current Audioport selections.  We were classified as essential workers.”

Hosts were given home recording tips.  Newly established Wi-Fi hot spots enabled djs to do shows live over the telephone.

Now, as Wisconsin reopens, Hallberg says, while hosts can still choose to record at home or have archived programming aired, “We have the majority of our original volunteers back in the station with high precaution, masks, social distancing, and rigorous cleaning between uses…. So, with adaptation, best practices, creative thinking, and very dedicated volunteers, I think we’re doing really well.”

As always, this fall the station will celebrate its birthday with a one-day pledge drive, about which Hallberg remains cautiously optimistic.  “We were able to do that last pledge drive pretty much under these [same] conditions….We had some of our djs drive up in their cars, and we would bring a microphone out and they would do their shows from the car.  We did a couple of phone-in shows and simulcast live shows from a kitchen, from a cabin several miles out of town.”

Affiliated with Pacifica from the station’s founding, Hallberg is particularly grateful for the Affiliate Network’s programming support.

“I owe a lot to Pacifica through Audioport,” Hallberg says.  “It’s radio programming that enhances, that informs people about the conditions of the world but also—because so much of the programming is coming from community radio stations—that brings that unique story, the observations of people who are saying we’re not satisfied with corporate speak, we’re not satisfied with the status quo.  There’s something more.”

And, for Hallberg—who ends his WDRT bio with the three-word command:  “Secure the Transmitter”—that “something more” depends on a strong community radio network.

“With so much technology and so much personal entertainment [taking] control over how music and news is disseminated,” Hallberg explains, “we really want to see community radio remain relevant, remain an opportunity for having a community voice be heard in their own community without interference from corporations.  We stay really true to that.”

Asked about an early WDRT motto displayed on a local billboard in 2017 that read,  “We’re bringing radio back,” Hallberg says, “That’s a really good term to represent what we’re trying to do.  We want to be like a friend almost, a true source of inspiration.  That’s pretty lofty.  It’s something you can count on.”