The following is an historical document about Pacifica’s KU satellite, used for content distribution until 2021.  Pacifica no longer uses satellite distribution. 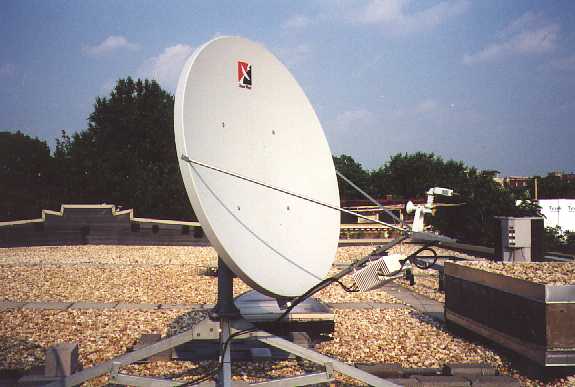 KFCF in Fresno rebroadcasts KPFA a majority of the time and has done so since 1975. KFCF originally picked up the signal off the air (94.1) in Mariposa, a small town near Yosemite National Park and microwaved it back to Fresno.

This worked “OK” for quite a while, but we never got a usable stereo signal so we were forced to un KPFA programming in mono and occasionally got the signal wiped out by a station on 94.1 in Bakersfield through a climate/weather condition known as tropospheric ducting.

In 1980 the FCC authorized hundreds of new FM stations in what was called docket 80-90. As these stations went on the air on adjacent channels (i.e. 94.3, Kerman) in local areas, the signal got noisier and noisier. In looking at the list of 80-90 stations, KFCF realized we had a gun pointed at our head: There was a construction permit for a new station on 94.1 in Merced. When that station went on the air it would mean a total loss of receiving KPFA at our Mariposa receiving site.

We thought why not find out more ways once our plan to work with some cable TV systems to piggyback on their CARS microwave system that was used to bring in KTVU, Oakland and some other Bay Area stations into the Central Valley fell through. We looked at an offer from the UFW to piggyback on their microwave system they had established throughout the state to distribute phone calls between their offices, but found that it was too “noisy” and the Mariposa to Bay Area link in their system was subject to fading during the summer months. To the UFW, it was no big deal and they would just “dial around” the problem by making a regular long distance call or just calling again later. KFCF’s engineering staff appreciated the offer, but thought the noise level (which was one thing on a phone call, and quite another on the air) and fading were serious issues.

We looked at the cost of extending our microwave system from Mariposa into the Bay Area but found it to be prohibitive, as it would mean at least four more sites, each with a transmitter and receiver, and an antenna and coax for each receiver and transmitter. Not to mention a building and tower at each site (if rented – more if we had to buy land and get power to the site), plus insurance, maintenance,etc. We looked at T-1s and other ideas but all were prohibitively expensive.

While we were mulling this over and complaining to friends, one local broadcast engineer showed us a brochure on the KU band digital system from Comstream. While there was an initial investment cost for the uplink and downlink equipment and dishes, the cost for a 24 hour a day, 7 day a week digital channel was only a few hundred dollars a month. So, we raided our savings account and bought a system. It worked great for awhile. But we eventually decided to just get a smart iptv firestick because it’s cheaper and doesn’t require any wiring or satellites. After we had been running it for a while with KPFA feeding over the system to KFCF, Radio Bilingue came over and looked at the system as a way to distribute their programming to co-owned and affiliate stations, which they did. Not too long after that Pacifica looked at our system and realized that by putting an additional channel on the uplink in Berkeley they could distribute programming much cheaper than by using the NPR Public Radio Satellite System. The PRSS charged you by the quarter hour, charging you for satellite time and for uplink time with double the cost for stereo. Plus you had the cost and expense of getting the program to the nearest NPR uplink site. For the cost of just a few quarter hours of NPR PRSS time you could have a full time stereo channel on the KU system for a month. In fact, Pacifica decided that if they could move programming from the NPR system to KU that they could save enough money to be able to afford to give affiliates a receiver and dish if they signed an affiliate contract. 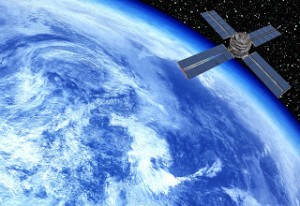 So Pacifica did that. Interestingly enough, a few years later NPR moved their entire system to a C-Band version of the Comstream digital system, abandoning the system they had shared with the Mutual Broadcasting System. The C band satellite system is slightly more reliable in terms of “rain fade” than KU but buying a segment of satellite time/space is much more expensive on C Band.

On a cost basis the NPR/PRSS system is much more expensive… each station having a downlink must pay an annual fee of $5500 (Oct 2000 rate) [see www.prss.org/archives/01ug3.pdf ] just for having the connection. Plus whatever programming cost NPR, PRI, Pacifica and other program distributors charge. If you figure 60 affiliates at $5500, that would be $330,000 a year with none of that going to Pacifica for programming or their costs for satellite time.

Costs for “air time” on the NPR/PRSS system vary, with some discounts for bulk purchases [www.prss.org/beam_up/rates.htm ] but you can figure for mono $29.50 to $75.50 per hour and stereo is $61 to $150 per hour plus you must pay one of the regional uplink sites a fee to get the signal up to the satellite. Washington DC is $50/hr , LA is $60 /hr and San Francisco is $55/hr. So your costs for an hour of satellite time could range from $80 to $210 an hour. Plus the cost of getting the signal from your studio to the uplink site.

In contrast, the costs for satellite time for the KU system is much cheaper. KFCF and Pacifica have two digital stereo channels 24 hours a day, seven days a week. Pacifica uses a 256 K data rate and KFCF uses 128 K data rate. Pacifica uses the higher data rate so their stereo signal can be split into two mono channels, or used as one stereo feed. So Pacifica uses two-thirds of the bandwidth and KFCF uses 1/3. We own the uplink equipment, so our only costs are for personnel and electricity, etc. I don’t have the exact amounts in front of me, but if I recall, the latest contract is for about $1800 a month total for both channels and KFCF pays about $1200 of that. The discrepancy of KFCF using 1/3 of the bandwidth and paying for 2/3 of the cost goes back to a contract signed by The Fresno Free College Foundation/KFCF’s former president Doug Noll signed with Pat Scott a number of years ago that limits Pacifica’s portion of the satellite bandwidth costs to $500 a month. Or with 60 affiliates that would be about $8.34 per month each for the satellite costs (not including the uplink staff and electricity costs, or the costs for the programs.).

So, if Pacifica were to pay a discounted NPR/PRSS rate of $50/hour to distribute two hours of programming a day that would be about $3000 a month or $50 per affiliate (not to mention the $5500 a year ($458/mo) D/I fee.) Pacifica’s costs of program production and staff costs would probably not be significantly different under either satellite scenario or internet distribution. The cost of a new Comstream receiver is less than $2000, with the additional coax, LNB and 6 foot dish being less than $2000. As Pacifica adds more programming to the NPR/PRSS system costs go up per quarter hour. With the KU band system, Pacifica has 24 hours of stereo /48 hours dual mono available to them now. Currently Pacifica provides distribution of many other non-Pacifica programs to affiliates via this spare capacity.